Last year we did one of South Africa’s top tourist attractions (Kruger Park) when grandma and grandpa came to visit. Now that it was time for their long awaited return, we met up in another one of the country’s top locations, Cape Town. We had decided to start off with two nights in the picturesque little town of Franschhoek, in the wine districts, not far from the slightly bigger city of Stellenbosch. Then we continued with four nights in Cape Town before jetting back to Maputo.

So the first few days were focused on wine tasting. Since my parents arrived six hours before us, they had time to try Franschhoek’s famous ”wine tram” before we showed up. This is a semi-antique tram line that stops at a few vineyards in the vicinity of the town. Then in the next couple of days, together we visited the Boschendal estate and the incredibly scenic Tokara vineyard in order to try excellent (and also not-so-good) wines. It was interesting to note the different procedures for the the tastings. At Boschendal you paid a small amount for a number of glasses of wine, while at Tokara you were allowed to taste mouthfuls of wine free of charge. In the end we bought a fair number of bottles in both places. 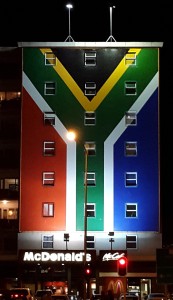 Then we took in at Leeuwenvoet Guesthouse in the heart of Cape Town, only a few minutes walk from the famous Long Street. Over the next days we proceeded to do the ”classic” CT itinerary… or we tried at least. Turned out South Africans also had holiday so it was shock full of people everywhere. Naively enough, we thought we could just show up at the port to buy tickets for the ferry to prison island Robben Island, but it was all booked up since long before. Likewise for those of us that wanted to take the cable car to the top of Table Mountain (I did not, this time, since my fear of heights increased since I was there last time in 2000), they gave up in the long queues. At least we had a nice but windy day out when we headed down to Cape of Good Hope. We stopped at the penguin colony in Simon’s Town on the way. There on the beach we coincidentally ran into the our Norwegian friends from Maputo, the Fossberg family. On the way back to CT we drove the winding, beautiful Chapman’s Peak Drive along the western coast of the Cape Peninsula. We went to the District Six Museum documenting the horrible story when all black people were forced to leave the District Six in downtown CT. They had a long history there with a flourishing community, but were instead forced to settle in poorer areas outside Cape Town. Then some of us went to the Kirstenbosch botanical garden on our last day there.