Far up in the north of the country, outside the coast, the island of Ilha de Mozambique is located. There around 14,000 inhabitants crowd together on the three km long, crescent shaped island. Originally an Arab port and trade post, but after Vasco da Gama visited the island in 1498 on his way to India, Portuguese, Arabic and Indian interests met there. Like Zanzibar, the island was a trading hub, not least with slaves that were taken from Zimbabwe and Malawi. The Arab sultan on the island was called Ali Musa Mbiki, which made the Portuguese give it the name Moçambique, which eventually became the name of the entire nation. The island subsequently became the capital of Portuguese East Africa, but after the Suez Canal had opened, it lost its importance and instead Lourenço Marques (now Maputo) became the capital in 1898. Nowadays, the island has been declared a UNESCO World Heritage Site and most people get their outcome from tourism or fishing.

In this historic place, unparalleled in the country, we spent our first holiday week during the summer break. To get there we first took a two hour domestic flight to Nampula, and from there a 2,5 hour car transfer to the island via a more than three km long bridge connecting it with the mainland. The bridge is a story of its own… built with Norwegian aid back in the sixties, it is single-lane with meeting pockets at regular intervals. But on Sundays, as it was when we came there, there are a lot more vehicles out and about, carrying people going to church or the market. Then it gets congested. Some distance out on the bridge we came to a full stop, and it took a lot of reversing and honking before we made it over.

The first thing we did after arrival was to jump into a boat, a motorized dhow. We were first going to stay three nights at a beach hotel, Coral Lodge, and this was their pickup service. The hotel’s location is actually on the mainland, but boat was still the best option to get there since it was apparently a long detour on bad roads to drive there.

I can say without any doubt, that this was one of the best places we have stayed at in Mozambique, and we were completely by ourselves except for an Italian honeymoon couple. Our bungalow was not overly luxurious but so incredibly tastefully decorated with attention to details. We relaxed on the beach, snorkeled among colorful fish, and went kayaking. And had fantastic food! It was a culinary heaven, absolutely amazing. A lot of seafood of course… fish, prawns, lobster, lulas (octopus).

Then we returned to Ilha de Mozambique for three nights. It is, as I mentioned, a world heritage site, where beautifully restored colonial buildings stand side by side with abandoned ruins. The majority of the population live on the island’s overcrowded southern half, ”Macuti town”, whose name is derived from the palm leaf (macuti) that traditionally covers the roofs of the shacks. The northern part of the island is called Stone Town, which is where visitors mainly hang out.

We spent a lot of time walking around the streets and alleys to experience the wings of history. As the saying goes, time had stood still. One of the days we hired a guide, Genito, who related to us the island’s past and the history of buildings we passed. Of particular interest was the solid fortress that the Portuguese had built. The Dutch made fruitless attempts to conquer the island in the early 1600’s, but weren’t successful since they never could capture the fortress. Another interesting building is the famous hospital, which after the inauguration in 1877 was considered one of the best in Africa and people came from far away to be treated there. Behind the derelict facades business is still going on in there, and plans for restorations have existed for a long time… but lack of funding is halting the progress.

One of the reasons we chose to travel here at this time of the year, was a jubilee at one of the island’s best restaurants, Ancora d’Ouro. It’s been under the ownership of Karin’s dear friend Eva Sandberg for ten years. They came together to Mozambique in 2000, sent out by a Swedish NGO, the Africa Groups. But while Karin returned to Sweden after two years, Eva has stayed in the country ever since. And on Midsummer’s Eve it was exactly ten years since Eva took over the restaurant, which was celebrated with a small dinner with close friends. In addition to us and Eva, Sweden was also represented by Mikael Andersson, an eccentric former IT entrepreneur who invested in forests and sawmills around Nampula and has a house on the island. A fun and interesting acquaintance!

As in Mozambique in general, life happens outdoors to a large extent: on streets and back yards and markets and parks… it is just so much more evident among the narrow streets and alleys of the island, compared to Maputo’s wide avenues. The children run around playing, and the bravest ones try to solicit a coin or two; the men sit and play board games; the ladies sell their produce from tiny stalls or directly on the street. 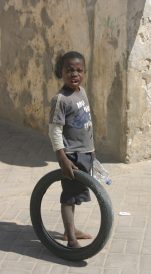 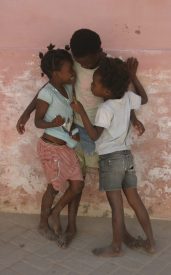 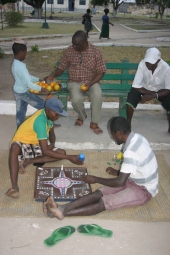 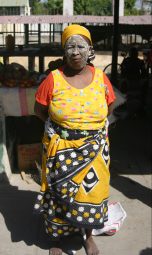 In the picture above to the right is our guide Genito’s grandmother who had a fruit and vegetable stall at the market. A really tough old woman who did not hesitate to voice her opinions. We met her several times, and at this moment she had applied a ‘mussiro’: a face mask from a powder that is made of the root of the N’tunkuti tree which only grows in this region. Mussiro is traditionally used by women of the Makua people, who are in majority in northern Mozambique, both because it is considered beautiful and for medical reasons… for example, to get a smooth skin.