Yes, it’s a bit tricky to summarize all the impressions from our visit to Namibia. It’s an incredibly fascinating country, full of contrasts, and so different from Mozambique, even though it is almost at the same latitude. Namibia is extremely sparsely populated, I believe the density is three people per square kilometer, so you will be driving long distances in between the towns and villages. Just as we experienced in Botswana last year, it is mostly well-organized and efficient. A remnant from the period as a German colony. Even in the smallest towns you’ll pass, there’s usually a couple of decent restaurants, an ATM, and a petrol station. At checkpoints, the traffic officers are saluting and  wishing you a good journey. Everything that you can just dream about in Mozambique, outside of Maputo at least. A large part of the Namibian landscape consists of rolling, scrubby savannah, which is not very exciting. But then there are other dramatic areas:  mountainous regions with strange rock formations, pure desert, or the great Etosha National Park up in the north.

We flew into Windhoek, a swift two-hour flight from Johannesburg, where we picked up our rental car. The first and last night of the trip we stayed at a guesthouse on Olof Palme Street, which felt good. Sweden during his time as prime minister supported most freedom movements in southern Africa, including SWAPO in Namibia. We started by driving north to Etosha, with an overnight stay on the way to get no more than 300-400 km’s to drive per day. We stayed for one night in a smaller private reserve called Onguma, just outside Etosha, before we continued for two nights inside the national park. It is dominated by, and takes its name from, the enormous Etosha salt pan. It was once a lake, which subsequently dried out and was covered by a salt crust. The salt, the sand and the sharp sun create an intense white light in Etosha, which is very special. Just like in the Kruger Park in South Africa, you self-drive on a network of mostly well-prepared gravel roads. But the parks differ significantly in their respective topology and nature; Etosha is considerably drier, harsher, and not as hilly as Kruger. We saw an abundance of oryx antelopes, which we hadn’t seen before. Amazingly slender animals with long pointy horns. Then a lot of zebras, gnues, springbok, red hartebeest, other little antelopes I don’t know the names of, giraffes, surprisingly many jackals, a few rhinos and lions. Strangely enough no elephants even though there are many. And unfortunately also no cheetahs, even though around half of the world’s cheetah population is found in Namibia. A little Etosha trivia is that the gate where we exited the national park is called Andersson Gate, named after the Swedish explorer Charles John (Karl-Johan) Andersson. And the gate we entered into Etosha through had the name Von Lindequist Gate. I do not know who that was, but it definitely sounds Swedish too.

After Etosha we headed towards the Atlantic coast, through a region called Damaraland where the mountains begin to emerge. We visited a place called the petrified forest. There you can see what once (280 million years ago) were tree trunks. But the wood gradually petrified, as the huge pressure of first inland ice and then ocean caused fibres to gradually be replaced by minerals such as iron and manganese. Interestingly enough you could still see the growth rings on some of the rocks. However, the trees did not grow here but up north in Congo and floated this way when the region was covered by sea. We stayed this night at a very special place, Twyfelfontein Country Lodge, far from civilization, amid beautiful cliffs and rock formations. Twyfelfontein is also a world heritage site because it is a place that hosts thousands of preserved rock paintings and carvings. We went for a guided tour to view a fraction of them. They were made by bush people 2000-6000 years ago, often for purely educational purposes. There were a lot of imagery of animals and their tracks, to pass on the knowledge of what this looked like to the next generation. Then they had plotted crude maps as well, showing, for example, the location of wells and waterholes. Absolutely crucial information in order to survive for these hunter and collector people.

Then we arrived the town of Swakopmund on the Atlantic coast. It was noticeably more chilly there, just around 20 degrees instead of 30-35 as it was most of the other time. On our way there we made a small detour to stop at the seal colony of Cape Cross, an incredible spectacle with innumerable amounts of howling and smelly seals. The females had recently given birth, so there were loads of cute little black pups with watery eyes. In Swakopmund we tried sand boarding in the high dunes just outside the city. We lay down head first on masonite boards and went down. The more experienced in the group had real boards, like snowboards. Even though sand is slowing down the speed more than snow, we still reached speeds of 55-60 km/h. Else during a couple of days in Swakopmund, we recharged our batteries by fine eating and drinking at various restaurants and cafes before continuing into the desert.

We set the GPS on the small village of Sesriem, the gateway to the famous Sossusvlei area (which, in turn, is part of the Namib-Naukluft National Park – the world’s oldest and driest desert) known for its orange/red sand dunes, An effect of the high concentration of iron oxide in the sand. Here you will find the world’s highest sand dunes. Some measure well over 300 meters. When we entered into Sossusvlei at dawn, in order to climb before the mid-day heat, we started by ascending the so-called Dune 45, named after its location 45 km from the gate in Sesriem. It is only about 150 meters high, which is surely enough, the view was striking anyway. Then we went on to Dead Vlei, one of the most photographed places in Namibia. Once upon a time it used to be some kind of marsh, but after climate change the area dried out and the trees that grew there died some 600-700 years ago. Since it is so dry they don’t rot, so they still stand there, charred by the sun, like ghastly silhouettes dancing against the surrounding dunes. A truly magical place. While we were there, we saw a German newly wed couple doing their photography in full wedding dress there (looked sweaty), which felt like a novel concept. Must also mention the hotel we stayed at outside of Sesriem, Le Mirage, built like an old Arab castle in the middle of nowhere. It could have been really cheesy but was certainly one of the greatest places we have stayed at, with spacious rooms and a well-manicured oasis like courtyard with pool and spa area. Just outside our balcony, the hotel had arranged a water hole where we could see the animals coming to quench their thirst.

From there, all that was left for us was to return to Windhoek. But also this last stage took us through beautifully wild, mountainous passes where zebras, oryx and kudu antelopes, ostriches, warthogs, and monkeys reigned free.

To conclude, I’d like to vouch for the good people at the Namibian travel agency The Cardboard Box Travel Shop, if anyone is thinking of doing a similar trip. They had arranged almost everything for us:  car hire, hotels, sand boarding, and even table reservation at some restaurants given that it was peak season for tourism. Yeah, I know it’s actually half the fun planning the trip, but sometimes it’s better to let someone who know the country on his five fingers do it. Especially if you don’t have much prior knowledge about the country in question. Everything went perfect, and we even avoided our biggest fear, the car breaking down on some remote dirt road (apparently, about 30% of the country’s visitors have flat tires, and we saw several cars with punctures)…

So finally, here are some pictures. Those of you that follow Karin on Facebook have already seen some of them… we borrow a lot from each other. Click on any photo to start a slide show. 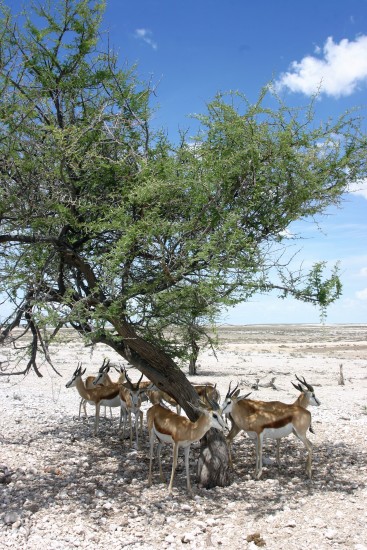 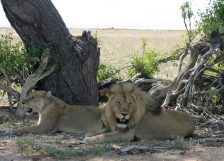 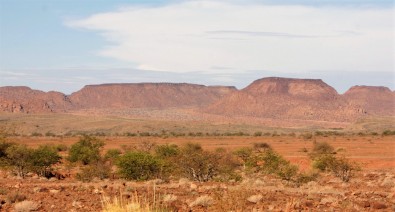 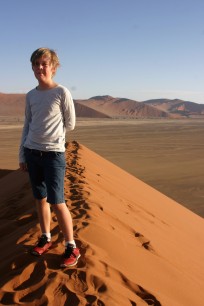 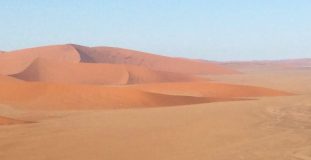 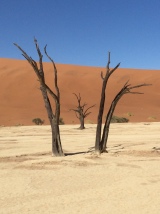